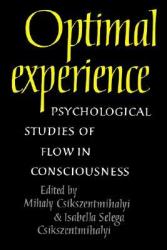 No doubt you’ve heard the expression ‘in the flow of things’ the idea of being in the zone, a place where nothing can interrupt your thinking. It all comes so naturally, so easily, as if by instinct.

But what is flow? Is it definable? According to Mihalyi Csikszentmihalyi (try remembering that for an exam), flow is being in a place mentally where little else has meaning, as if able to block out external stimuli, to focus on one thing totally. Crucially, flow is intrinsically motivated and often has no tangible reward other than the performance of the activity itself. It is self-fulfilling, but that is not to say that if rewards become part of this process you will suddenly cease to enjoy the activity. There are those who disagree:

“No man but a blockhead ever wrote, except for money.” Samuel Johnson

Examples of people who experience flow are: surgeons, athletes, writers, artists and musicians. So let’s apply this theory to the act of writing of which Csikszentmihalyi devotes a chapter.

Anxiety is something which you may have dealt with when writing. It’s common to experience doubt and feel like you are unable to write anything of worth. Even the best suffer. Stephen King has thrown manuscripts in the garbage believing them to be subpar. That’s just one example.

Ever wondered why you sometimes struggle to string sentences together, like your thoughts are sticky? Well that’s because your cognitive resources are overloaded. The short-term memory stores cannot operate as usual due to anxiety. The ability to juggle inter-related material and simultaneously think about them is slowed down meaning you cannot write like you do when you’re in the flow of things.

Interestingly top performers are at higher risk of choking in pressurised situations as they overthink what they are doing and tend to demand more of themselves. Perfectionism could be crippling if it is in the extremes because no matter what is written it is never good enough. The standards can never be met resulting in a cycle of negative feedback on your own work.

Fear and impulsiveness are also related to anxiety, meaning that your writing will become rushed, muddled and lacking the discipline to write comprehensively. “Anxiety at best creates impulsive and poorly controlled writing. At worst, it creates emotional and cognitive havoc that makes writing impossible.”

The opposite of anxiety is boredom or underarousal. Boredom will result from finding no challenge in work which holds no interest and is not engaging. The lesson here is that you shouldn’t try to force yourself to write something that is incongruent with your natural way of writing. I’m not saying don’t try something out of your boundaries, because that is a challenge in itself. But if I was to force myself to write a vampire trilogy to cash in on the latest craze my work would be shit because the subject holds zero interest for me. My writing would likely become “chaotic and rigid”. Emotional disturbances while writing are very common. A study of high school students found  that 90% experienced some emotional turmoil while writing major papers.

Becoming absorbed and lost in the flow of thoughts while writing is a joyous thing. Thoughts flow easily from subject to subject, sentences are rattled off, words come easily. The positive emotional state seemingly requires no effort to produce, so ‘effortless’ is a great word to describe how the process feels.

How to achieve this magical state? Simple. Have clear goals and know how you will achieve them. If you think about it this is really common sense. Planning and structuring is a key thing to productive writing. It applies to life itself also. It makes things manageable and easier to conceptualise. When it comes to writing always have a plan for the next stage, ideally before you return to the computer.

Do not set unrealistic goals. These will merely lead to anxiety and stop you from writing. The principle being, don’t write a 500 page novel if you’ve rarely committed pen to paper beyond filling in a questionnaire. Start small, start modest, start slow. Otherwise frustration will set in and the chances of you sticking to a project will dwindle. A real balance is needed between boredom and anxiety; the ideal state is smack between these. There needs to be enough of a challenge to stimulate you, but not too much to seem insurmountable. Ultimately, if you feel capable you will excel. The risk is that even things which are only perceived as being too hard can become genuine obstacles to progression.

Motivation, absorption and a loss of a track of time: all optimal states of flow. When we do hit a snag while writing a way around the problem is not always obvious. But experimenting with alternative ways of piecing writing together can hold the answer. Tinkering and adjusting can give us fresh perspective and provide solutions where there wasn’t on before.

Enjoyment is “clear attention and command” over your activity. Physiologically we change; heart rate and oxygen consumption increase, so being in a flow state is not just a cognitive one.

The worst thing a writer can do is try and do the impossible. By attempting to go beyond your current ability the only result can be failure. A good metaphor Csikszentmihalyi uses is that of a fighter jet. Try and push it beyond its limits and it will splinter and crash back to earth. Your ability is this jet. You can develop and make improvements meaning your jet can do even more things but push it while airborne and a crash is likely to occur. I’ll leave Bruce Lee to finish this article: “Be water my friend”.

1 thought on “Letting your writing ‘flow’”