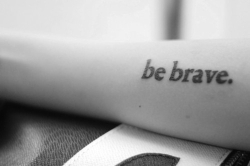 There are different forms of bravery. The fireman rushing into an inferno knowing death is a 50:50 to save a child. Speaking out against an oppressive regime with the prospect of torture, brutality, jail time and death in that order for them, and possibly their family as well. Proposing something outrageous such as electricity, to be laughed at ceaselessly until the laughees flick a switch and all is forgiven as a candle timorously burns away unnoticed in a corner.

The ultimate bravery as a human is to say what you mean. Diplomacy will get you so far, but nothing ever evolved from its origins through a retention of the status quo. People speak out, they revolt, because we become static, a malignant complacency sets in until things turn stale.

As writer’s the best thing you can be is brave. You’re not saving anyone from a real life crisis but you can pose existential questions and challenge thoughts. Cowardice is easy. It’s easy to write something that everyone will like. But in doing so there won’t be a trace of yourself left on the pages. When you read things others have written it leads to an appreciation -‘I wouldn’t have written that’ but this author did and now I feel braver the next time I hit the keyboard. Invigorated, freshened and willing to push my own boundaries outward in all directions.

Be brave. Don’t think of everyone you know reading your book, their faces screwed up in judgement. Be courageous and do not be penned in by fear of disapproval.

I hope this didn’t come across like some bullshit self-help nonsense. If it did tough 🙂

7 thoughts on “Be Brave”