The answer is a mixed no and yes. They are not afraid of heights otherwise they would not be able to fly. The stupidity of this question is now making itself clearer than day as I have made the classic mistake of anthropomorphising an animal. But I’m going to allow my stupidity to air for a day.

A question which has been baffling generations, ‘Are ducks stupid?’ may have finally been answered. So far researchers know for a fact that bread in various forms is something ducks do like. But that’s old news. Mitch Hedberg observed that ducks opinions of him depend on whether he has bread or not. We know this much.

Empirically speaking, the intelligence of ducks is up for debate. We know that brain size does not equate to intelligence – George Bush Jr. We also know they will eat white bread and mouldy white bread at that – without peanut butter! 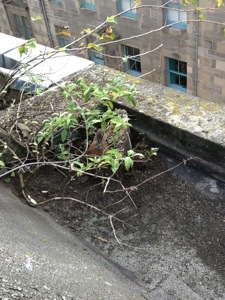 The reason I question the smartness of the mallard duck is because the other day my girlfriend and I (or me and my girlfriend if you’re modern) heard a couple of quacks outside the flat. A ton of Steven Seagulls fly around the area and pigeons as well so we thought we’d misheard. Then we opened the window and a female duck flew off. Only the day after did I notice the beginnings of a nest, with a couple of shy eggs poking out. At least if there isn’t any in the fridge I have backup. I jest, I wouldn’t eat baby ducklings, but it might actually be the most humane way for them. An act of evil to negate a larger evil if you will.

The nesting site is a quarter mile away from water…and on the top of a building, three stories up. The drainage system consists of some holes in the wide but tiny raised ledge, they might as well be duckling death holes.

Even if they somehow survive, they’ll be faced with knowing they have one of the worst mother ducks ever witnessed – or will they even realise? It’s a ducks life.

2 thoughts on “Are ducks afraid of heights? Are ducks stupid?”