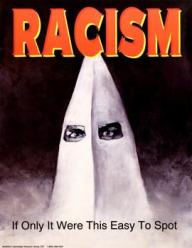 RACISM IS AN issue which refuses to go away, because the same bigots who are racist don’t all die at once. It is a horrendous thing to inflict on someone, to make them feel in-superior due to them being who they are. What I see now in 2014 really saddens me, because people have completely lost the contextual relevance of things that are said. Context is EVERYTHING. Especially in such a heated area as racism.

With that in mind, let’s play the catchy titled, ‘What Would a Bigot Say?’

Someone who is genuinely racist might say something to the effect of:

‘They should go back home where they belong.’

An illustration of todays ignorance especially in the 25 and under generation:

Justin Bieber tells a joke involving the word ‘nigger’. He is now a racist. Apparently telling one off colour (sorry for the pun) joke is enough for a guy to be labelled a racist in the media. For starters, I never thought Justin Bieber would form any part of one of my blog posts, but in seriousness, to begin with, it is clearly a joke. Jokes are comedic. Jokes are not offensive unless you choose to take offense. Some are in ‘bad taste’, but still, a joke it remains. Secondly, Bieber becomes an actual hater of black people by virtue of saying ‘nigger’ several times as a jokes punchline. I’ll bet just about everyone has told a joke involving race as the punchline, or at the least laughed at one. I’ve never seen it turn someone into a full on racist. Jokes and words don’t generally have that ability.

Another exceptional ability of people these days is to confuse a stereotype with being racist. If I say something about Chinese and how they all eat rice and run takeaways that is a stereotype. If I say they are a bunch of immigrants who should fuck off back home, it’s racism. There is a HUGE difference. But I hear people all the time saying, ‘Was that racist?’ or ‘Is that racist?’. They actually don’t seem to know which is ridiculous and that sort of thinking has led to the current state of affairs where people are unaware of what actual racism is and what stereotyping is. They have become synonymous now which is worrying.

What people don’t grasp, and the media is largely to blame, is that racism is a hatred and dislike of another creed. It is that simple. Yet repeatedly we see someone lambasted in the media for ‘being racist’ when the person in question clearly has no issue with a particular race.

I live in Scotland. If someone makes a joke about me being some kilt wearing heroin abuser, by todays (lack of) standards, they are racist. No, they are stereotyping. This obsession with vaguely racist comments and soundbites is really damaging to the fight against actual racism. When you order a black coffee at a Starbucks in London and get told it’s actually a plain coffee, what hope is there? Are people racist for merely wearing the colour black? The list is extensive…

Hopefully people wisen up and realise that bigotry and stereotyping or jokes are entirely separate things. In short, people really need to get a fucking grip on the context of what is said and how it is said and where and who it is said to before making wild allegations.

*If you are offended by any of the words in this post, I give up.

4 thoughts on ““Was that Racist?” – Racism and context”