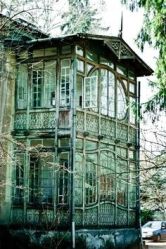 Driven mad by the sun, now he sits, holding a gun in his solarium

Looking out at Peruvian skies, all because

A dictator can’t dictate where he flees and hides.

So thoughts were thought that shouldn’t be known,

Even without being fed, they had continually grown.

They are traitors, rapists, plotters and spies,

Or any other imaginative, strictly optional lies.

That’s how many times, the barrel had been preying at his temples

To hush those voices: millions of nameless whispers

Until one day he read an article in an old magazine he’d procured which addressed positive psychology, espousing the virtues of accepting yourself for who you are and living in the present, not the past. This spread the first smile on foreign lands across his weathered tan face.

Sadly, the very next article addressed an attempted suicide by a man, who was now a breathing vegetable because he had shot himself in the frontal cortex and the bullet had failed to deliver the end credits. Apparently, the optimal angle, if it could be referred to as that, was to place a gun at the base of the head aiming upwards towards the brain…