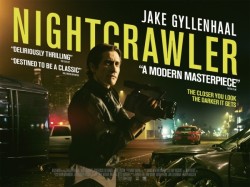 REGULARS OF MY blog will know I’m not big on reviews. Plenty of people do them better and in more depth. But sometimes I watch or read something that makes me want to review it; Nightcrawler is that something.

Nightcrawler is about a man eking out a living who discovers that footage of car crashes, murder scenes and anything gruesome can fetch a dollar or several hundred. When this man is also a psychopath of some variety, his newly chosen profession leads him to do some very deranged things in the name of getting some sellable film for the local news station.

Jake Gyllenhaal stars as the lead and plays his role to perfection, a really terrific performance which hopefully won’t be overlooked when Oscar time hits. There is a very real feel to the film which is difficult to do especially nowadays – any gamers will feel like they are watching a real life GTA. The character is entirely believable, a business-talk spouting man, driven to do whatever it takes to make himself a name – I read this as an allegory of American success – step on heads, even kill them, and your dreams can come true, people will look the other way as long as you excel.

Rene Russo plays the morally deficient news station selectee-of-footage in a fantastic supporting role. We get an inside look into newsroom policy, fictional of course, but it’s very easy to imagine it is an accurate depiction without exaggeration. Shock news doesn’t exist anywhere else I know of and Nightcrawler really nails the questionable ethics of its pursuit, showing it to the public, and the way in which a big lead can be seen as worth skirting with the law for the huge viewer numbers it can generate.

Dan Gilroy wrote! and directs, he captured the mentality of crime journalism with a compelling narrative, the psychopathy of which is channelled through Jake Gyllenhaal who puts in his best performance I’ve ever seen from him.

Nightcrawler is different, it is playing in cinemas, that itself is commendable. The fact it is an outstanding experience is a testament to well realised scripts, great acting and cinematography as opposed to schlockbuster bullshit. What I’m saying is, I highly recommend this film. Buckle up!

4 thoughts on “NIGHTCRAWLER – A film worth watching (and reviewing)”