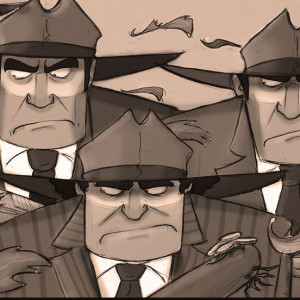 This was written using the titles of my DVD collection for inspiration.

It’s kind of a funny story. I was raised on these mean streets. A desperado. Felt like a ghost in a shell. The neighbourhood became known as where the wild things are. There was blow, a fight club and a strip of violence you could land an airplane on. I felt like the last king of Scotland eventually, a real life kingpin.

Of course we never spoke of the departed – the living dead. If you weren’t in the loop, in the game then you’d never survive. The descent into crime was rapid. Always being sent to Chicago for some Italian job. Planes, trains and automobiles, you name it we used it.

We all had a history of violence. Fighting with the gangs of New York was a rite of passage. The way of the gun; people taken here taken there, even at home you could be taken too. Don’t get me wrong, we weren’t natural born killers. But it was a catch-22 situation. If you wanted in you had to go the whole nine yards. There was two conditions: no ladykillers and no childs play. The prestige of it all was enough to turn good fellas bad. All for the chance of becoming a hero in America. At first it was the usual suspects that turned up but this is no country for old men, you need true grit to survive the midnight runs.

Once, leaving Las Vegas we stopped at the House of Flying Daggers, a Chinese joint. Seven jarheads starting eyeing me and some pals up for a fight. There will be blood I’d thought to myself. They’d doubtless been to planet terror and fancied them a skirmish. Next thing you know we’re spilling out on to the strip in front of the casino next door. I grabbed me a blade and showed them the real lord of war. Thought I’d killed one of them in cold blood so we hightailed it past the fountain and ended up in a burlesque joint watching some dream girls at least one of em’ legally blonde, maybe two.

I had blood on my hands but no one could tell the difference in the dark. My buddies said I fought like a gladiator but I felt like a dead man walking. My only relief was I’d thrown the chopper in some garbage. I wanted out the metropolis as soon as possible, feeling trapped like on an island I couldn’t escape. The holiday had turned into a story fresh out the pages of some pulp fiction.

When nature calls you gotta’ go. So I went to the stinking pisser and it was like a scene from singing in the rain. I checked the mirror, looking pretty in pink. There was blood all over my white shirt, it was like love actually. I was fascinated by what I saw. The collateral hit me in the dirty two-way. A stained sticker clung on to one side; swingers and a smudged number. At the same time I heard the sirens. I’d have to become an illusionist to get out of this scrape. And as you know from talking to me now, I escaped without a bullet leaving my six shooter. But bruce almighty it was close. I waited for the dark night and hopped in my boys easy rider hollering ‘catch me if you can!’. Of course people get places and d’tails mixed up, next thing you know it’s a Bronx tale.

Either way, the cat returns. Now I’m a gold member, one of the untouchables. People always ask if I have regrets but if your boys in the hood are all gang related there’s no other option. Only thing I’d change in the thirteen years since that incident? Nothing, I was saving Private Ryan from a certain death in the war anyway. At least he died on home turf, I put him down like a narc..but I refer to him as the nightmare before Christmas. Before the killing fields opened up for business. Gangster squads swarmed the area, 51 deaths, all under thirty.

Of course there were a few good men who didn’t shoot on sight. That’s why I’m alive…and to think I’d have never met such a beautiful mind as hers. She was straight off the cover of  Vanity Fair I swear, like a girl who leapt through time. She was my green mile. Then I learnt a thing or two and just before I became the world’s greatest dad I had to send her on the polar express, her body of lies disappeared in a fishing hole on the middle of a lake. What lies beneath stays beneath. I’d been a fool sometimes but a ratcatcher always, I had a nose for it. She went undercover longer than most; from California, I naively thought she was my L.A. confidential. Kiss kiss, bang bang.

The only reason I’m telling you all this, is because there’s only so much a dying man take with him. I’m leaving my film collection to you kid. Just be careful what you watch..