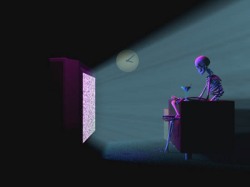 IDLY I LAY, more sprawled than anything else. This sofa was mine. Like fingerprints, every sofa is identifiable by an ass – unique undulations in the surface material. The digits of my right hand expertly found their way around the rubber buttoned remote even in the dark, like obedient blind worms. Of course it was never dark per se with the TV screen on but I never looked down, it was as if my hand operated independently of conscious thought. It probably had a life I never knew of, one more interesting than my own.

Adverts everywhere even during the programmes, a horror that had seeped in over the years. Frankly half of them were more interesting than the programmes themselves. You might hear such conversations as, “Did you watch the feature length advertisement for Brand X on channel 546 last night?..Amazing!” But that’s besides the point.

Persevering in channel hopping I could scarcely have believed my existence would arrive at this juncture, the sort of junction that leads to Sad Bastard no matter which way you turn: Population 1. Still, it was Friday night, what else was I going to do? Go for a drink? That was banned in the second prohibition.

Hop, hop, hop. Rabbit like my digits searched through digits in the quest for information, for some fucking intelligence to exist, the sort which had replaced alien conspiracy theories in respect to whether it existed or not. And then, then, it happened. I’d heard about it. Read about it. Been told about it. Seen about it. It was beginning tonight. The end of civilisation. It made me gag to think about it, but I’d beg on my knees to have Simon Cowell return with some vapid bullshit, anything other than what I was about to witness. Everyone remembered where they were for the moon landing, JFK, Hussein, 9/11 and all that shit. This was about to eclipse the sun and all of them in one.

The TV spoke. You are joining us live for tonight’s unmissable event of the century and we don’t say that lightly! You the viewer will be able to decide the fate of our contestants…

Presenter number one rambled on in what I made out to be ‘promo promo promo’. I couldn’t help feel a self loathing creeping in as I closed the curtains lest anyone see my despicable viewing habits – using the remote of course. I looked at the edgy Van Gogh calendar to my side. The year on it was 2028. Richard Bach was only off by about nine years. He’d predicted this! I was amazed it had taken this long for someone to be killed on live TV for our entertainment.