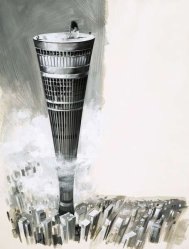 Skyscrapers. Cloud breakers. ‘The Big Glass’. It might be raining on the floors around 150 and below, yet if you worked in the upper echelons it could be sunny and you could marvel at the tops of clouds as they charged towards new horizons. These were buildings that appeared to have an urge to leave planet earth. There were more stories than a Kindle could hold. That is how magical my workplace was, inspiring awe every time I climbed all over it. I must have been the poorest person to ever draw breath beyond the first 150. Were rich men and women more inclined to do get their wear-once suits even vaguely creased never mind dirty, I’m sure I would not be where I am today. Scientifically speaking they weren’t all stuck up self obsessed pricks, of that I was sure, only because I hadn’t met them all.

I had seen it all in over eight years working here, or hanging around as I liked to call it. Angry phone calls, sleeping bosses, lonesome tears dripping on to pristine mahogany desks . Then there was the sex; man on woman, man on man, woman on woman. You’d think they would realise that the window cleaning occurred on a weekly basis, that the Picasso bird shit previously decorating the windows had gone by the time they were done tucking in shirts and adjusting belts. Money and power didn’t help them see any better.

I’ve even had a gun pointed at me from the other side. Five suits were sitting about celebrating some early afternoon success, such as approving a dam project that would ruin acres of protected land while redirecting water to the nearest city, leaving the farmers downstream on the dried crusty bed of shit creek. Well worth a toast – while fish floundered for oxygen baking in direct sunlight. In the midst of making a glass panel squeaky clean, a gust of wind swung me outwards on my rope and harness slapping me hard against it. The panes were dam thick so I don’t know if they heard me or not. Upon reflection it must have been my quick shadow on the plush carpet. One of them went to a storage cupboard and pulled something out. I expected a drinks cabinet or something as frivolous. But never expect the expected in this place. It turned out to be a gun.

The rest of the suits stood watching me, exchanging smiles, laughing at me as I floundered in the whip of the winds, all carabiners and rope. Meanwhile the gun was being cocked and loaded – a red shell held up for all to see slid smartly into place. Drinks sloshed as the party became more animated.

I was simultaneously anxious at being buffeted around in the unusually strong wind, while intrigued as to what was about to happen. Was this how they fired people? Was there a hidden range? No was the answer. A wide grin I would never forget turned itself on me. The brown haired man walked towards me and stood eight feet away. He cocked the shotgun, raised it to his hip, paused briefly, turning around to lap up the silenced cheers, then eyeballed me. I lipread, “How thick is the glass?” before his magnolia smile returned.

Pain and falling were my next sensations. Imagination, like our expectations, can be powerful. I was falling to my death. Was I not? As if a shotgun shell would be accurate enough to sever my rope…

Opening my eyes I saw the glass panel spider-cracked, just behind it they were laughing and toasting, with glass that could break, dishing out back slaps and high fives. My eyes closed involuntarily, the knuckles of my squeegee hand as white as 100gsm paper.