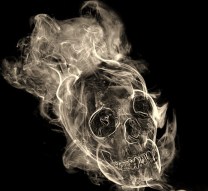 Have you ever lit a cigarette,

In the mind, or real,

Only to let it burn down to the butt, singeing the fingers – or synapses?

The same way farmers start controlled fires to generate new growth, I feel that burning, the scorch marks invisible, as I stand by, helpless, as pocket infernos char my mind, that no surgeon or brain scan can detect. Pouring petrol on the metaphysical fires they burn through; boiling blood, excoriating delicate membranes, until a hole appears at the apex of my skull, providing a chimney of smoke allowing heat-fused ideas to rise upwards in beautiful invisible wisps raising no alarms, just questions, as creativity stands by ready to stamp on the licks of flame eager to spread.

New thoughts, ideas and consequences arise, green shoots spearing through plots of black matter: a new story, a twist, a character, all rise from the seeds I never sowed, carbonated, light and juvenile, hostage to daily moods and vying for attention before they too burn for their own good, sometimes rescued by typing or a gripped pen scratching a pad, the only tattoo they’ll ever partake in: digital or other.

Boiling at the same temperature as water, blood blazes through the brain irrigating it with each convulsion of the aorta, searching through veins and capillaries, delivering the oxygen ideas need to survive, but some days those same tributaries sear upwards, bringing nothing but blue promise, bubbling with dissatisfaction creating only noise where once whispers reigned supreme, one at a time, talking of stories and novels, of future glory with British politeness waiting to be heard.

One morning, I yawned and shook the dreams away like a wet dog on a river bank, muscles realising the game was over until night-time. Looking down at my white pillow, I noticed scorch marks in the cotton trailing up the headboard and inexplicably I ran a hand over the top of my head, feeling only hair, and a relief I couldn’t place.