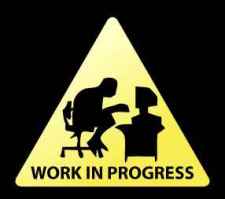 Live from the interwebs, from no semblance of a studio with me Fionn Grant, this evenings news or morning or afternoon depending on your location…

APART FROM WRITING short stories and posting ideas on writing what else have I been up to?

For starters my first finished manuscript As Yet To Be Titled (not the actual title…) is still in the lap of the writerly Gods aka literary agents. Of the submissions I sent out in April, I have had one nibble also known as a reply to an email, and five rejections. The rejections took the typical format of ‘Not for us’, and one was nice enough to wish me luck.

Tentatively titled Down To Earth, my thriller, is 50% written sitting just over the 40,000 word mark, and I hope to have it finished within two to three weeks. I printed off that first half and I’m pleased with the development especially for a first draft having learnt from some mistakes from previous projects. The best advice I can give you when writing a book is to review it half way through or as soon as the plot, characters and story details get a little out of hand, e.g. not remembering how many special agents arrived in chapter five.

Iron out the details, make some brief notes and continue writing. Your head will be clearer, there’s no snags you’ve forgotten about ready to ruin a plot point, without niggly worries you’ll write faster and better. There is nothing worse – I really mean this – nothing worse than finishing a novel and realising something that happened in the early chapters you forgot about affects the entire story, meaning that the second half of the book requires major revamping. Having to switch around and chop and change scenes, characters, plots etc is painful. You’re left to fix a broken puzzle of your own creation. Every time you switch something, it has a knock on effect, the demon butterfly, meaning everything from that time point is effected and doesn’t work anymore.

What else? I’ve been editing a large batch of short stories from flash fiction to lengthier pieces. Still deciding on when to self-publish a short story collection and looking to send some more out to publications to get rejected. Still amazes me how some stories hold up over time, and others I thought were great need some major revisions. Check out Useful Links For Writers if you’re needing some inspiration.

Over to you WordPress for the weather…

17 thoughts on “Writing: Works In Progress”