I DON’T WATCH much television but The Big Bang Theory is one of the best sit coms to make it to TV – period. Anyway, I’m not here to promote the show (like it needs it!) instead if like me, you might have noticed that after the end credits there is a brief note from Chuck Lorre the co-creator of the show, but it never stays up long enough for anyone to read it. 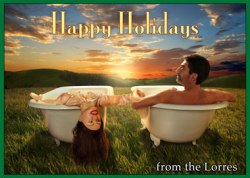 After several years of reminding myself to look into it I finally did. Tired of catching a sentence or two, I searched the web and all of the vanity cards can be found here: http://www.chucklorre.com/index-bbt.php

Usually they are something witty, something amusing, maybe just an image, but often Chuck airs his soul and the cards contain a heartfelt message, perhaps wisdom, or he passes his point of view on a recent event. I haven’t looked through all 500+ vanity cards, but it’s well worth having a perusal especially if you like the show or Two and a Half Men that he helped create as well.