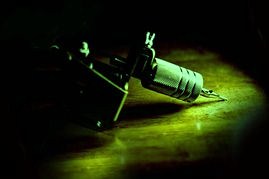 Her eyes bulged. A grin stretched out that black lipstick, revealing a wide smile made up of – of, tattooed teeth? “You’ve come to the right place. Shirt off and lie down.”

Forward. I didn’t like her tone and she still hadn’t suggested anything. “What are you going to cover it with? I’d like some idea.”

Irritated at my lack of obedience she rolled her eyes, looking upwards as if the ideas were in the light bulb or the red ceiling. “Well, how about this? I’ll do it for free if you let me do it. Like a surprise.”

Thinking it over, I asked myself why I was undoing buttons instead of turning my back and leaving. “Free? Erm, ok but keep it small.” I was desperate to get rid of her name. Free sounded good.

She nodded innocently then pointed to the chair. Shirt off, goosebumps breaking out, I lay down stomach first, the surface icy. She put black rubber gloves on and a mask, then I heard the tattoo gun buzzing, her chair rolling closer. The needle was like small bites from a horse fly, over and over again, in a fraction of the time. Her hands moved against my skin as she adjusted her position, and she dipped the needle in and out of the black ink on a tray, the only thing I could see in my peripheral. I imagined what she might do as cover. Nothing generic I hoped. But as long as it wasn’t that damned name I didn’t care.

She said nothing and I asked nothing as she worked away. It felt therapeutic just lying there in a meditative state, as time slipped away on my wrist watch.

I felt a cloth blotting my skin. “All done.”

Drowsy I propped myself up. “Really?” She didn’t respond, wheeling away, the slap of gloves coming off enough confirmation. I turned over and slid down until my feet reached the ground. She tossed me my shirt and went into a corner, pulling out a mirror the size of a picture book. I twisted and looked to see what she’d done without it but the angle was too acute.

“Want to see?” She giggled, the mirror dangling on a finger.

Angling the mirror next to my flank, I looked, excitement and trepidation mixing, having subjected myself to tattoo roulette. Blinking, focusing, I looked at her, the smile was back, and struggled to make out what she’d done in the smeared mirror.

What was that?! Holding my arm out the way I began to gawp at it. Some part of me dreaded pop art, something pornographic or anything non-masculine. Instead she had covered the name over entirely with a wizard that gripped a crystal ball and a wand who sat grinning on a throne, half of his face peeled back to a skull, the other as normal. The etching, shading and details were incredible. “It almost looks real,” I mumbled.

Relaxing, I was about to thank her when she rummaged in a box and came back with film, placing it over the tattoo and sticking it in place with tape.

“It looks amazing, thank you,” I said, trying to convince myself, struggling to get a look at her eyes, and doubly re-evaluating her choice in the process. But swept up in the moment riding the tattoo high I was delighted, a detailed 3-D colon would have looked better than my ex’s name. But I didn’t like wizards. I’d never been into fantasy or Ungeons and Dargons or whatever the hell it was called.

“Pretty good for free,” she said, traces of a smile still there, the kind that hid real intentions.