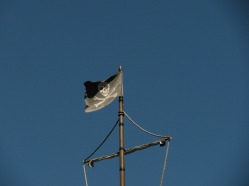 Nam H. Nguyen (find him at Reality Through Fiction) and myself collaborated on this story, a bit of pirate fun 🙂 Enjoy!

THE MARY JANE wasn’t like any other pirate ship. Where others were fast, as they were small, and could manoeuvre to their success, the Mary Jane was fat and grotesque. Unable to match speeds with the merchant ships, unsuccessful runs had seen her limp and wounded.

Not that one could tell.

She resembled a shipwreck and with a crew to fit, so much so that the crew found more success bailing for help than skirting British Shipping.

Jones stood unsteadily on the foredeck, fishing rod in hand and the line recessed in the wind. It wasn’t because he wasn’t used to the sway of the deck, but rather as a former sailor, too used to it.

The Mary Jane was sturdy and fat. She didn’t sway at all.

“What the Cap’n think’en,” Jones grumbled. His fortunes hadn’t changed since he left his former profession. An illegal fisherman captured by the royal navy, he was given two options. Gaol or state sponsored piracy. He took piracy and went right back to fishing aboard the Mary Jane. “We be waiting two noons ‘ere ‘ready.”

“For’ they ambush,” Mcool said.

Jones followed his pointing finger and saw a frigate heading West on the sapphire sea.

“Cap’m! CAP’m!” yelled Mcool, turning to see as the right dishonourable Captain White stumbled out of his cabin beneath the wheel, grumbling, squinting, then placing his triangular hat on. Across his left arm the scars from a shark attack always drew Mcools attention, part of the myth and legend of being aboard the Mary Jane.

“What is it ‘dis – this – time! Have ya’ – you – found me a worthy target?” He always corrected his English. Over cups of rum he’d assured us he would lead us to glory and plunder, with a return to land and high society when he was ready.

“Frigate cap’m. She’s ripe for the taking,” Mcool said, the reek of rum and mouldy clothing filling his nostrils as the diminutive Captain White joined him on the starboard side.

“Hold my rum!” Mcool took it while Captain steadied himself and brought his telescope out from a battered pocket. As the ship rocked gently, small satisfactory grunts could be heard. “You have a good eye. Maybe even two.” He turned around and roared at every crew member before snatching the rum back. “Full sail! That frigate is mine…ours.” He trotted off to take the wheel as Mcool and Jones looked at each other.

“No need to fish!” grinned Mcool, as they darted to their positions.

They didn’t have to wait long. The captain of the frigate was an idiot. Sails cross-wind such that even the Mary Jane could catch her – at oars.

The men scrambled to their new positions, above and below deck. Scrambled – because the oars were a new feature to their hull. Their emplacements an embellishment from the captains last night’s drunken rage. So angered he was – he ordered the swivel guns fired against the hull.

In the morn he was suitably embarrassed – ordered the construction of oars from the splintered remains.

There was suitable scrambling to which the captain approved, and in the chaos, Mcool found himself slow enough to be without an oar – as intended.

The first shot always missed. It was the second shot that counted. With the men at the oars and the gun un-prepped, there was little shot to be found.

Mcool looked around at the deck crawling with fellow lowlifes and took a chance. Dragging the barrel of rotting bait to a cannon, he began packing in handfuls of foetid octopus, squid, and unrecognisable bits of chum. Jones looked about him and came over to help, the scaley, slimy liquid coating their arms, the stench unbearable.
Nobody else said a word, and the powder was prepped for when they were close enough to the frigate. They literally wouldn’t know what had hit them.

As the stern ploughed through the low rolling sapphire waves, all eyes were upon the nearing frigate which made no moves to avoid a clash.

“Where be the flags?” Captain bellowed from behind the wheel.

Closer and closer, the frigate was almost within firing range. “Jones, you got the flint?” Mcool asked.
“Aye,” he said, patting a waist coat pocket, before vigourously scratching his beard.

The frigate cut a sorry shape. No men were visible on deck, the wood of the entire ship was in need of treatment, as if left to rot and twist from many suns.
They were close enough to fire the cannon. Jones winked and pulled his flints out, crouching by the black fuse.

Only a quarter mile away, the tension was felt in every muscle fibre of Mary Jane’s crew. “Bring the sails in!” barked Captain.

And then, as they neared, as Jones was sparking the fuse into life, a man could be seen strolling from the main cabin under the wheel house, wearing a white shirt and black britches, no shoes on his feet, a bottle in his hand. The fuse was half way through. As the Mary Jane slowed down to avoid a collision, the most beautiful lonesome song could be heard from the deserted frigate:

First I hung my mother,
Away-i-oh…

And just as the next line was due, an almighty boom reverberated, as the contents of the bait barrel soared, scattering worse than shot and surprising the man of the frigate who stood still. Through his telescope, Captain watched as they were pelted by the rotten projectiles, then he looked down at Jones and Mcool. “Quick thinkin’ – thinking – lads! There shall be rum in my quarters for the likes of youse – you…” He grinned, but one gold tooth couldn’t take the shine away from the other rotters.

44 thoughts on “There’s No Arghh In Pirate – SHORT STORY”