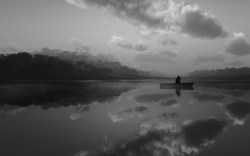 “HEY! Watch. This is how you kill a fish.” Hoisting a rock up, he smashed it onto the head of the racing-green pike, life leaving quickly through the glass-like eye, but I swear I saw it, the thinnest wisps.

Blood and scales dotted the picnic bench chosen as the place of sacrifice.

“One more to make sure…” and Dad raised his arm again, mashing the pike into the very grain of the wood, the head now flattened, innards oozing out from the gills and mouth.

He looked at me smiling, that job done smile, that gold-won podium grin. Then back down at the ten pounder. He smashed and smashed at the head in a frenzy until scales covered his face like glitter and the head was crushed, severed from body. Only then did he stop, wheezing hard, the stink of fresh fish filling the air.

I’m not sure what it was. But there was a clue in that experience that Dad was a psychopath. At least that’s what the prison psychiatrists labelled him. Seemed a little much to add that on top of multiple homicides. Not sure how many more he needed to qualify as a serial killer. I reckoned maybe five, but who’s to say really?
Even now fishing has a way of calming me down, providing a place to think, one line at a time, as sunshine bounces off the surface of Mt. Posit Lake leaving it like a dazzling yellow skin.

Occasionally I catch a bass or pike. I never bring them on board, never eat them. I prefer to watch as they swim themselves to death unable to free that hook. So helpless; if they could they’d beg for a rock, unless their jaw ripped away in the struggle, leaving no winner and a feeling of dissatisfaction.

And all it is, is a mere distraction. On all my visits, I’d surveyed the whole lake bed. My fishing gear tells me the deepest point is 433 feet.

Ever watched those documentaries high on the channel listing? It really is true what they say about killers going back to the scene of the crime. My Dad did it, and I followed in his footsteps. Behavioural? Genetic? I didn’t care either way.

Somewhere, underneath, beyond the slapping water on the aluminium hull, is a collection. If I have the lake to myself, to us, I’ll flip through the Polaroids, every face alive, some even smiling, and I wonder, when my mind gets mathematical, if the odds of catching a fish without a baited hook, are higher or lower than killing any random person I meet.

One day a thought occurred to me: I started catching and eating the fish. I never used rocks. One chop with the machete was cleaner, more efficient. And if they say anything about generations, it’s about being innovative, improving on old techniques, pushing the envelope: whatever that meant.

I got to figuring, that the fish ate at the collection. So if I ate the fish, I could get some of their soul in me. It’s a theory of mine, and ever since I saw that pikes soul escape as a child I knew they went somewhere, that bodies are more than flesh and blood – lots, of blood. With more souls in me, I get more powerful, live longer, feel more energised. I can spend more time with the wife and kids.